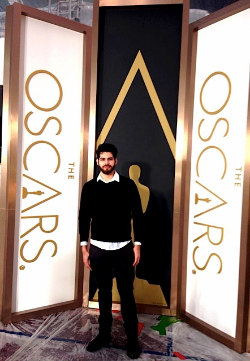 Last year, William Martinez attended the Oscars.  Actually, he was working at the Oscars, and you can trace a chain of events from this plum job back to MVLA Community Scholars, a program of the Los Altos Community Foundation, that offers recurring college scholarships and mentors to local low-income youth.

Martinez, an intern of NBC Universal, helped on movie projects, assisting stars and producers, as well as working at the Oscars!  Although it sounds glamorous, it was not an easy road to get there.

William attended UCLA in 2009, majoring in Political Science with a minor in Film, but was forced to return home after only one year despite having been offered several scholarships. “The financial burden was just overwhelming,” he says.

According to Martinez, he “took classes at Foothill Community College to keep myself on track and… found a job at a startup in Silicon Valley.  After a year and a half I was able to return to UCLA.”

Nancy Federman, a member of MVLA Scholars and William’s college mentor adds, “The wonderful thing about MVLA Scholars is that they are committed to the student and stick with them until they graduate, even if it takes more than 4 years.”

Both Nancy and William agree that the most important quality Martinez demonstrated was perseverance.  Keeping his goals foremost in mind, working through every challenge, being patient, and never losing faith; these were the elements of his success.

Once back at UCLA, William became an intern, then an assistant for Emmett Furla Films where he met actors, producers and industry specialists. The experience and networking from this job helped when he applied to NBC Universal.

Martinez acknowledges that he and Federman “…have a great relationship. She has been a great support system throughout my entire journey. Without her help, I wouldn’t be in the place I am now. Thanks to her and the financial support of MVLA Scholars, I have had the chance to meet incredible people. I was also able to find out exactly what I want to do with my life.  I have worked with James Franco and Mark Wahlberg, worked the Oscars, and attended the MTV Movie Awards, Music Video Awards and the Alma Awards.  Who could have dreamed this?” William did.

MVLA Scholars is a program of the Los Altos Community Foundation.