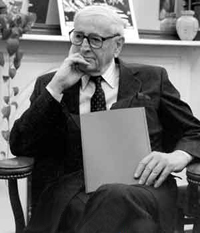 It seemed that the unifying principle for all of these views was community building. Various commentators on community were researched. Perhaps the earliest writer on community in the new world was John Winthrop, the first governor of the Massachusetts Bay Colony, who wrote:

“We must delight in each other, make other’s conditions our own, rejoice together, mourn together, labor and suffer together, always having before our eyes our community as members of the same body.”

The year the Foundation was formed, Dr. John W. Gardner (1912-2002), considered “one of America’s greatest 20th-century visionaries,” wrote his book entitled On Leadership (1990). The discovery of a pamphlet entitled Building Community adapted from a chapter of that book provides the most comprehensive building community view. It was adopted as the guidebook for the Foundation.

Dr. Gardner had an illustrious career and was president of the Carnegie Corporation and the Carnegie Foundation for the Advancement of Teaching, a U.S. Secretary, and the founding Chairman of Common Cause. His life was the subject of a PBS documentary entitled Uncommon American. After ending his professional career as a Haas Professor of Public Service at Stanford University, LAMV – CF had the opportunity to involve him in the Foundation. He was the speaker at LAMV – CF’s 1997 Annual Brunch and was a valued advisor during his time at Stanford. He wrote the Foundation this note after his brunch talk, “I enjoyed my time with your folks. They are a bright and interesting group. I’d be proud to be named an honorary founder.”

Dr. Gardner is the Foundation’s one and only Honorary Founder, an appropriate distinction for the man whose writings inspire the philosophy – and much more – of our Foundation today.

Below, in Dr. Gardner’s words from his pamphlet Building Community, are the ten essential ingredients he believed comprised a healthy community:

“The play of conflicting interests in a framework of shared purposes is the drama of a free society … to prevent the diversity from destroying the wholeness, there must be institutional arrangements for diminishing polarization.”

2. A Reasonable Base of Shared Values

“There has to be some core of shared values. This is possibly the most important ingredient. Values that are never expressed are apt to be taken for granted and not adequately conveyed.”

“A good community fosters an atmosphere of cooperation and connectedness … gives groups and individuals reasons to believe they are fully accepted … and institutionalizes arrangements for dispute resolution.”

“There should be active and continuous communication among a variety of organizations and agencies in and out of government. Non-governmental organizations can develop effective information sharing networks.”

“A healthy community reaffirms itself continuously. It builds its own morale.”

“The healthy community has many ways of saying to the individual ‘You belong, you have a role to play, and the drama has meaning.’ It is more than anything else that accounts for the sense of identity as characteristic of community members.”

7. Links Beyond the Community

“…the community seeks to preserve its own integrity while reaching out to play an effective part in a larger whole. In the most desirable outcome, the community leaders will establish collaborative ties with leaders of other sub-communities.”

“Any community that seeks to ensure its continued vitality will not only enable those young people to develop to the full but will prepare them for their future roles, instilling shared values, fostering commitment to shared purposes, and teaching them to preserve and renew the common heritage.”

“A healthy community should have a sense of where it should go and what it might become.”

“There must be continuous collaboration between local government and the private sector. There must be an infrastructure of neighborhood associations, churches, citizen groups, youth-serving organizations, and professional groups…”